Until now, programming, design, video editing and other tasks that require computer machine power have been provided as desktop applications on Windows or Mac.

While this is not an inconvenience when working alone, team collaboration requires that each person uploads their work to a server, where it is downloaded, edited, and uploaded again by others.

Lightweight data exchanges such as Google Drive's Documents and Presentations can be accessed and edited simultaneously in a browser, but until now there have been few tools for rich content creators to use.

These days, with the technology enhancement around the browser and the spread of remote work, more and more startups are developing software to make the tools that rich content creators use at work in the browser.

One of the reasons behind this trend is the shift to individual craftsmanship. With the improvement of PC performance and with the widespread sharing of professional skills and know-how on the Internet e.g. on YouTube, individual creativity, which was previously limited to a hobby, is now stimulating each other, resulting in an explosion of quality and creativity. As the base of creators expands, it is a natural progression for tools to move in a direction that supports flexible collaboration for richer contents.

Historically speaking, we can say that the Rich Client, which is in the middle of Thin Client and Fat Client, is thriving. The evolution of web technology and the improvement of computing power on the cloud side (reduction of cost for computation) are the major factors.

It is noteworthy that 3D technology on the web, which has been treated like a toy, is now rapidly gaining in value and meaning. However, in the world of the metaverse, users will move back and forth between 2D and 3D, so we expect that companies working on web 3D technology will become more important. Most of the web content is still in 2D today, and what Web 3D technology deals with is the interface between 2D and 3D.

VNTANA, a 3D e-commerce company, has the technology to make products look 3D on e-commerce sites and raised $10.5M in Series A funding in November 2021. 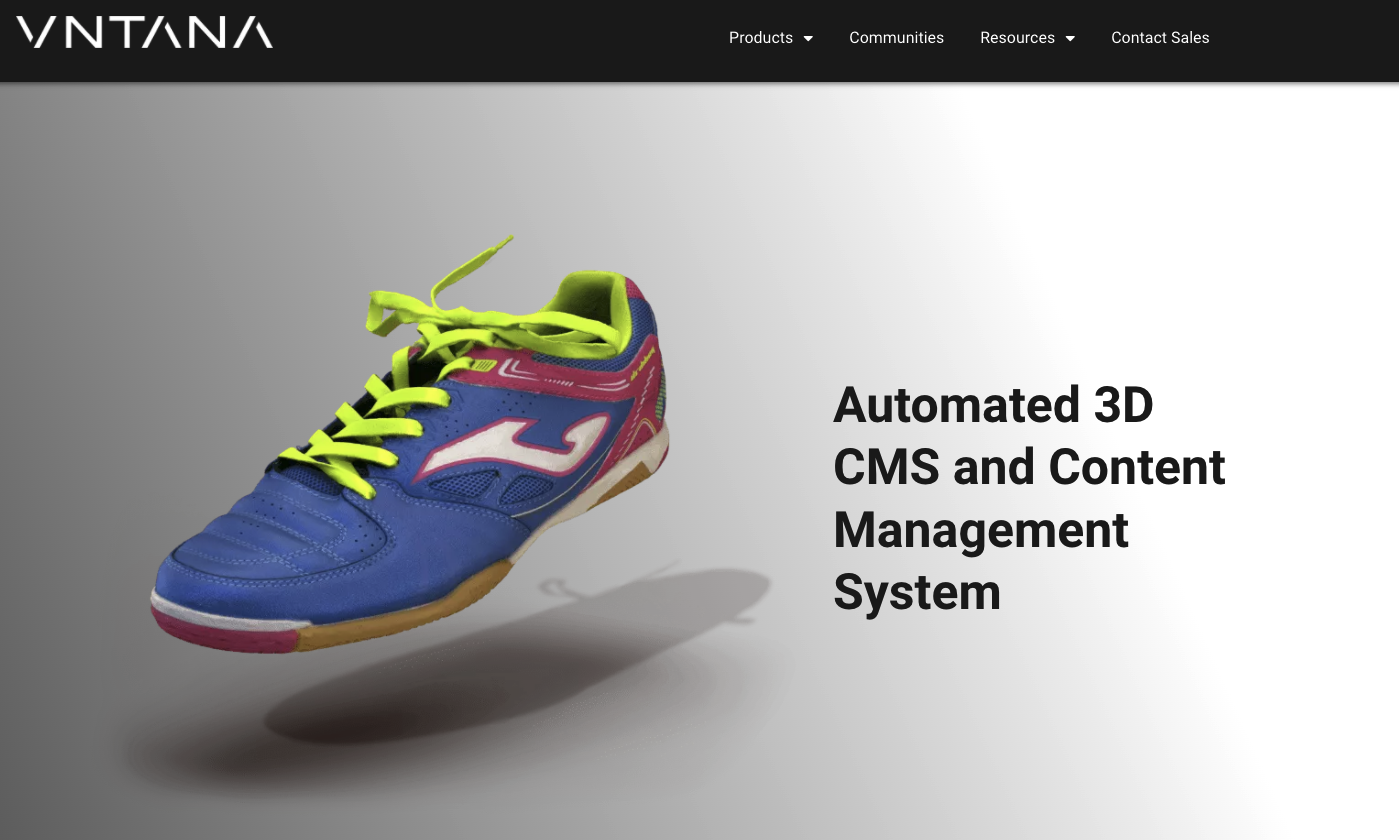 Open source software (OSS) monetization methods started with support in the past, and now hosting is becoming the mainstream. For example, Redash, a data analysis tool, offers its OSS version for free if users host it on their own server, and charges a monthly fee if users use it on the cloud hosted by Redash.

While many OSS are using server hosting as a monetization method, we observe alternative new methods. Prefect, a startup that develops OSS for workflow management tools, monetizes not by hosting, but by providing a monitoring service to ensure that the hosted products are working properly, and Frame00 uses DeFi, a blockchain technology, to allow users to deposit virtual currency, Dev token, into OSS projects. Using Di-Fi, Frame00 provides a system that returns the money generated by users depositing (staking) Dev token to OSS projects to both OSS developers and supporters (stakers).
To date, more than $3M has been deposited in over 1,600 OSS projects. 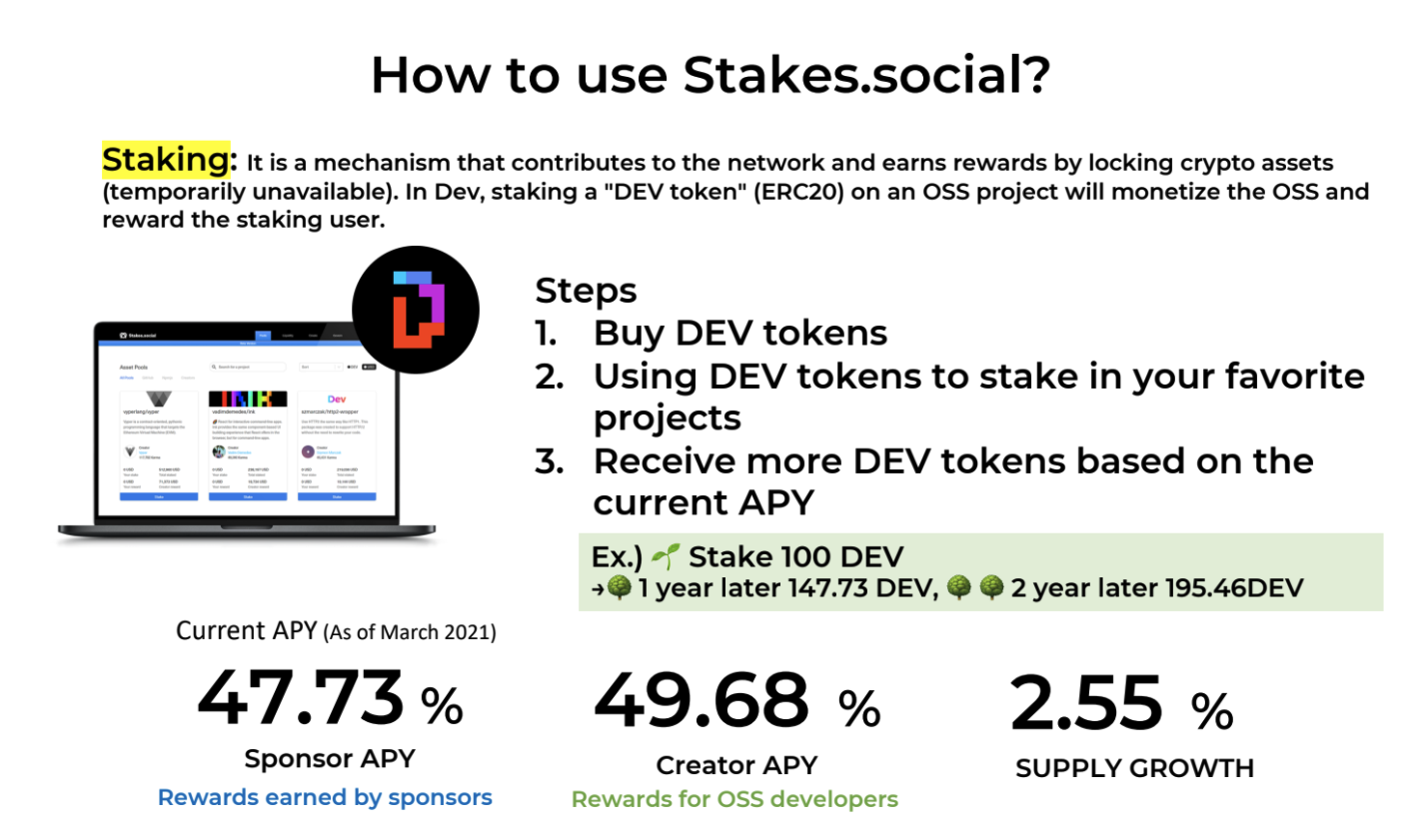 Source: Dev Airdrop (https://airdrop.devprotocol.xyz/) The APY for the Dev protocol Stakes.social is close to 50%.

Since OSS development is community based, there is a strong affinity for tokens that are also managed by the community. As OSS projects and companies that provide OSS products become more monetized and funded by tokens, the value of the entity cannot be measured by the market capitalization of legal tender alone. Venture capitalists, in particular, will need to look beyond legal tender ledgers and financial statements but more substance on the project when evaluating it to invest in. As can be seen from the fact that Andreessen Horowitz is expanding investment in OSS, OSS, which had been considered "volunteer" and "unprofitable," is now attracting attention from the viewpoint of investment.

There are now more than 800 unicorn companies (as of November 2021) in the world, with two or three unicorns being born every business day in 2021. Notably, companies that develop products using the data (APIs) provided by existing unicorn companies are becoming the next unicorns.

Anima, a U.S. company that makes tools to automatically code design data, makes use of the APIs of Figma, a famous unicorn company to provide design creation tools. Anima raised $10M in September this year.

Anotion (now Wraptas), a Japanese startup which allows users to easily create Web pages using the API of Notion, a note-taking and workspace service, was acquired by Peraichi, a subsidiary of Raksul, a Japanese listed company.

Source: Unicorn Board Leaps To Just Under 1,000 Companies, Reaches $3.4T In Value (https://news.crunchbase.com/news/crunchbase-unicorn-board-1000-companies/) The number of companies becoming unicorns will accelerate in 2021.

Every product, ancient or modern, is destined to become a platform, either intentionally or by force, as it becomes more popular. This trend is even more pronounced now that software is dominating. In the past, the typical perception was that only companies with history and authority provided reliable infrastructure, but in the software age, the sustainability and reliability of the startups driving tech is increasing, and they are becoming infrastructure, and even new services are being created on top of that. Unicorn companies have become the platform for the mass production of the next unicorn companies.

What is most important in this context is the idea of APIs (Application Programming Interface) and ecosystems, which are also mentioned above. APIs themselves are not new, they have been around for a long time. What has changed? In the past, APIs were mainly provided by operating systems such as Windows and Mac. Third parties used the OS APIs to develop applications (photo/movie editing software, browsers, etc.) that ran on that OS. In other words, an ecosystem existed for each OS. However, in the age of web applications, web applications with a large number of users began to open their APIs to the public. This allows other web applications to connect with each other "horizontally" and expand their functions and applications. In other words, by linking APIs with other companies, user experience and convenience will be greatly enhanced to a level that cannot be achieved by a single company alone. By being a part of this cycle, the frequency of use and the number of users of the company's services will further increase.

What kind of impression do you get when you hear that you have a server at home nowadays? You probably think that it must be the work of a limited number of people, such as hackers and engineers. However, 10 years from now, having a server at home may be the norm. With the decline of trust in big tech platforms due to privacy issues, more and more users want to be in control of their data, but unfortunately, there are no services to meet this need.

In the near future, everyone will have a server at home, just like Wi-Fi router or Apple TV.

Source: Umbrel raises $3M in seed round to get a server in every home (https://blog.getumbrel.com/seed-6d09aa08f8ac) Umbrel is running 90% of the nodes in the Lightning Network in 2020.

This shift can be the disruption of the cloud. Depending on the strength of the privacy level of the data, the storage may be automatically assigned to either cloud or (your) personal server. Here, there is a concern with storing data on a personal server because you may need to make backups yourself. We think there are ways to make data redundant by using distributed storage such as IPFS for instance. In this context, in an opposite way, you can offer storage of your personal server to others, in other word, a personalization of the cloud business, through which you may get Filecoin as compensation.

Another aspect is that individual developers can easily become online service providers. You will easily publish your own services or products without hosting, and most interestingly, you will be able to sell them on the App Store. Cloud providers may face the innovation dilemma because their businesses are competing with each other. Cloud service providers may have to steer when and how to include differentiation from personal servers in the cloud side.

The main monetization method in the VR industry has been just to “sell off” the apps you develop on Steam or Oculus Store. However, with this method, it is difficult to earn a stable income while, for example, creating a famous game will temporarily increase the income.

This year, Meta (formerly Facebook) released a subscription-based billing system for developers of the Oculus Quest platform. Meta has also announced that it will start offering advertising services within the VR.The more ways to monetize VR apps, the more developers are expected to increase. 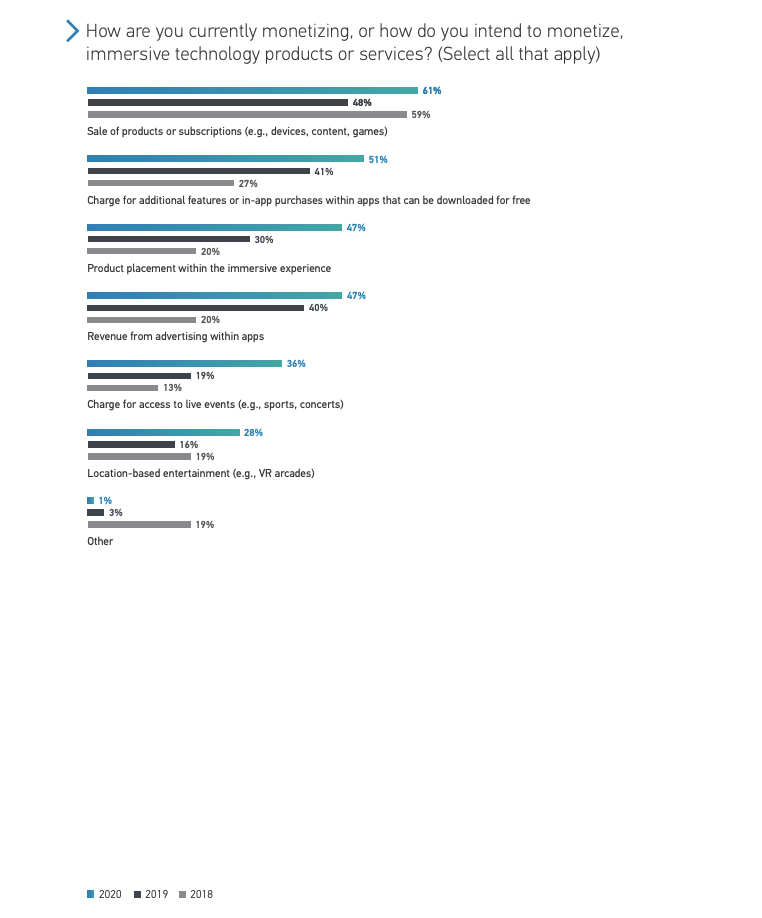 Source: 2020 AUGMENTED AND VIRTUAL REALITY SURVEY REPORT(https://www.perkinscoie.com/images/content/2/3/231654/2020-AR-VR-Survey-v3.pdf) It is apparent that monetization methods have not been established until 2020.

Anyone is looking forward to seeing more VR apps, but if that happens, there's no doubt that VR platforms will start charging fees like the App Store and Google Play do for mobile apps. We can expect the same trend to happen with VR apps. VR platforms compete each other again and some killer apps becoming available on all platforms, then and apps becoming stronger than platform as we are also seeing on mobile (e.g. Epic Games).

Now that cloud services have become commonplace, almost no one touches a physical server anymore. Microsoft Azure, Google GCP, and Amazon AWS continue to be the top three cloud providers today, and everyone from large corporations to individual developers are directly contracting with either of the three cloud providers.

Developers are entering an era where they can use these services and not sign up with Microsoft, Google, or Amazon directly. 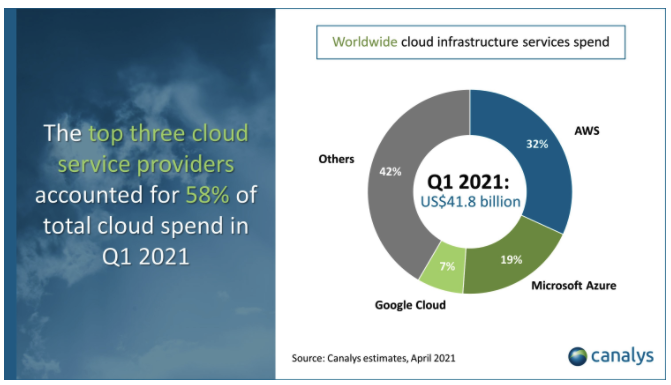 Currently, many developers use different clouds depending on the limitations of the tools they want to use. For example, while the main cloud is AWS, they want to use Firebase for the backend, so they “partially” use GCP.

“Overlay cloud service” means a layer that hides or overlays (automatically distributes) the base cloud layer such as AWS, GCP, and Azure. To begin with, it is technically strange to match the low-level cloud with the request of a tool (application). Just as today's programmers are able to code without worrying about memory management, the removal of worries that cross layers will allow them to focus on application development. Just as programmers who know pointers are becoming a rare breed, the number of web developers who do not know AWS may increase in the near future.

In any case, as web application development becomes more complex, the demand for overlay clouds will increase. In fact, for some huge web applications, there is a trend to have their own cloud. Dropbox is a prime example of a company that moved from AWS to its own cloud, which led to a significant improvement in cost of sales and an IPO. 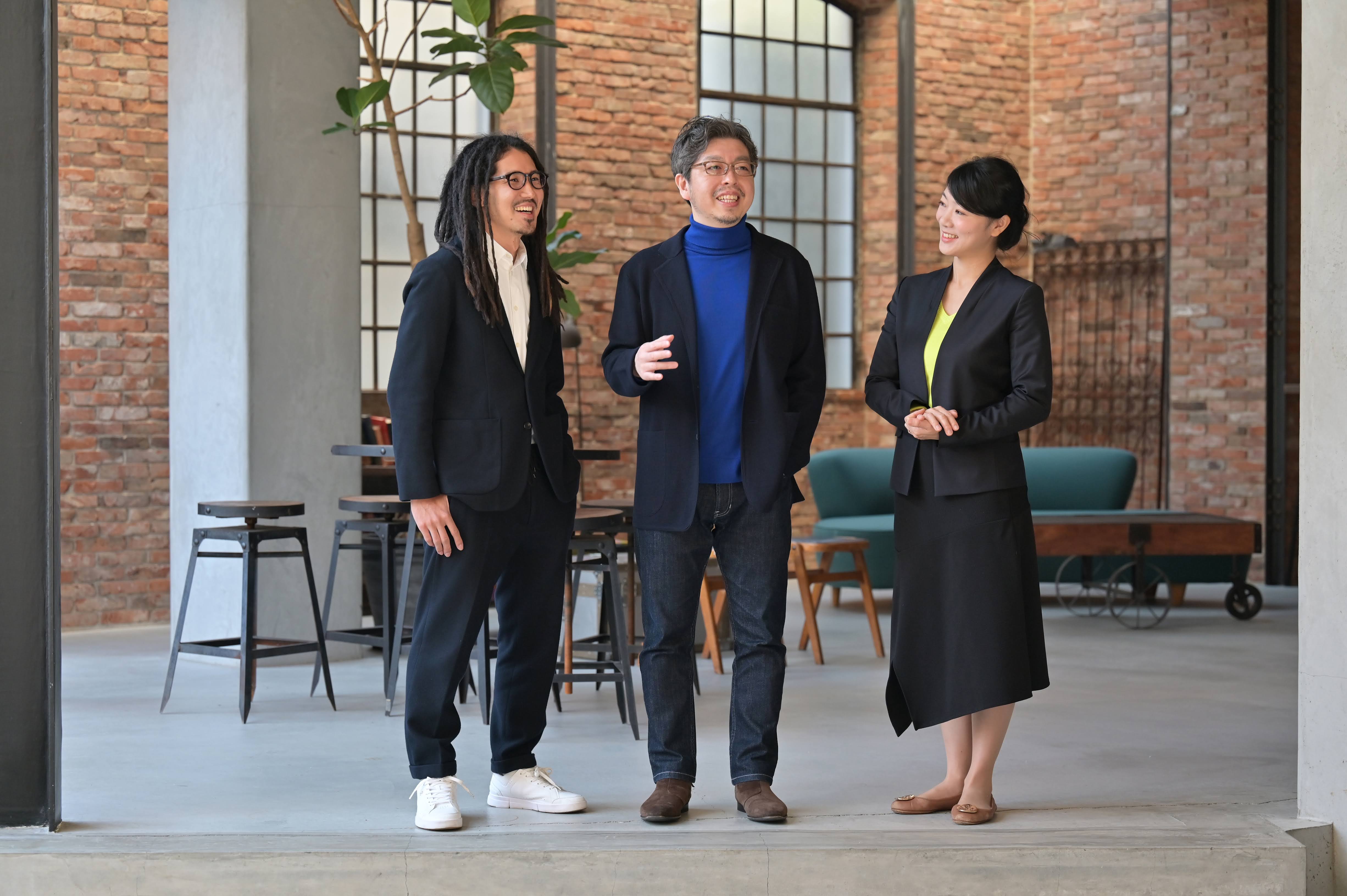